My husband's favourite so far. Peter Panda is made from painted egg carton bits, and that's about it - apart from his little bamboo! 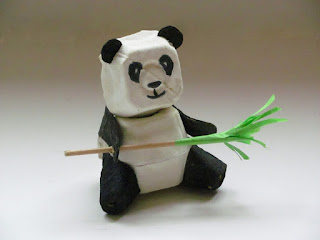 2 Egg cartons (with the cone shaped pieces down the middle - some don't have them. It's the same part used for the penguins and the monkeys.)
Scissors
Black and white paint
Tacky glue (Make your own by putting a small amount of PVA craft glue in a clean, uncovered jar or yogurt pot for at least a day. The longer you leave it the thicker and tackier it gets.)
Or use a glue gun
Nail scissors or similar to make slots (*to be done by an adult or with grown-up supervision)
Black felt-tip or gel pen
2 tooth picks
Green tissue paper

1. To make the body, roughly cut out two whole egg cup pieces from the egg carton, then measure and mark points around each cup, about 2cm up from the cardboard bottom. (More or less than 2cm is fine, as long as it's the same on both cups).
Join the points with a pencil, to help with the cutting, and cut carefully along the line.

Spending a bit of time measuring and cutting can be a bit fiddly, but it does make it easier to fit the two pieces together. 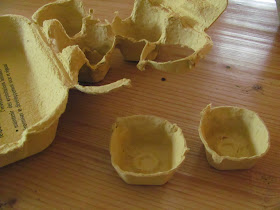 2. Use plenty of tacky glue around the edges to stick the pieces on top of each other and to fill any gaps. (Or use a glue gun)

3. While the body is drying, cut out another egg cup, but leave one side a little higher, so it curves upwards making a kind of lip or tab. (See photo below) 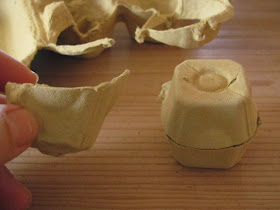 4. Once the body is ready, draw a slightly curved pencil line (slot for the head), on top, and with nail scissors* pierce a hole in the line (keep them closed, press down and twist from side to side), then cut along the line and open up the slot a little. 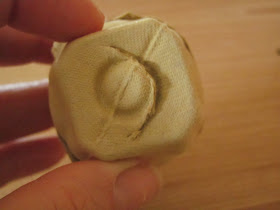 Push the head tab in here to check it fits. If the head sticks out too much, make your slot bigger or the head tab smaller. Take the head out again. 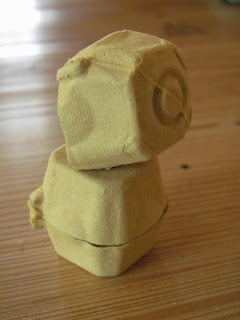 5. Use two middle cones for the legs. Cut them out roughly first, then neaten up, so they're both about 4cm high. Again it doesn't matter if they're more or less than 4cm, as long as they're the same height.
Halfway up one side, draw a line straight across, and then draw down the next side at a diagonal, to the bottom corner (do this on both sides). Cut out your leg pieces. 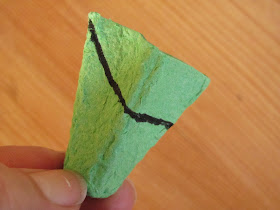 ...you want them to fit fairly snuggly to the egg cup body. Keep snipping away until you're happy, but don't glue them yet. The left leg in the picture below still needs a little work! (apologies for colour change) 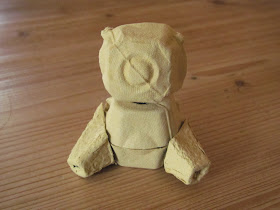 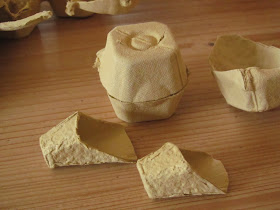 6. Next, paint the body and head white, and the legs and some spare card black. This is for the arms and ears. Paint both sides black (we used the egg carton lid). 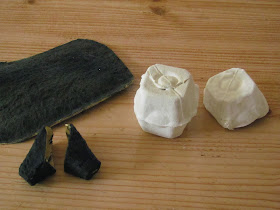 7. When dry, glue the legs to the body using plenty of tacky glue (or a glue gun).

8. While that's drying, cut a piece for the arms from the black card. You want it long enough to wrap around the back of the egg cup body (roughly about 12cm). You can cut a straight strip (about 2cm wide), that's absolutely fine, but it looks good if you make the strip slightly curved, wider in the middle (about 2cm), and narrower at the ends. (like a wide smile!) Round off the ends for the paws. 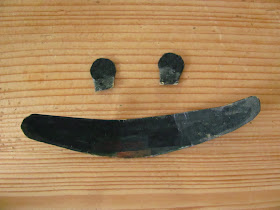 9. Cut out ears too, and remember to make them long at the bottom, so there is a card tab to slot into holes on top of the panda's head.

10. Back to the arms, and make a small hole in each paw (put the card on top of a piece of plasticine/modelling clay and push the tip of the *nail scissors or a skewer through)  Glue the arm piece on - it should sit a little higher at the back - and push a cocktail stick through the holes to hold everything in place while the glue dries. 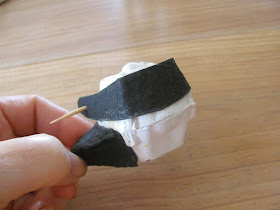 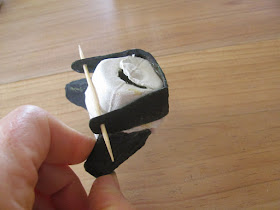 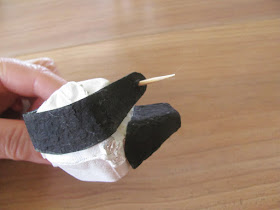 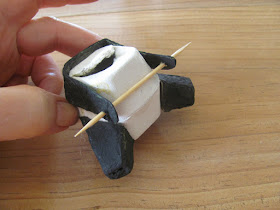 11. While that's drying, use a black felt-tip or gel pen to draw a face on your panda. For the eyes, start by drawing a small round ring, then colour in around it, leaving the centre white. 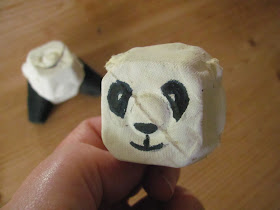 12. Mark slots where you want the ears to go on top of the panda's head (more to the sides looks best), making sure the slots are long enough.
Use *nail scissors to pierce through the card on the line (keep them closed, press down and twist from side to side). It is a good idea to place a big lump of modelling clay behind the ear slots, so you have something to push into. (the blue stuff in the photo below)
TIP: Instead of making slots for the ears, you could simply fold the ear tabs back, and glue them to the head. 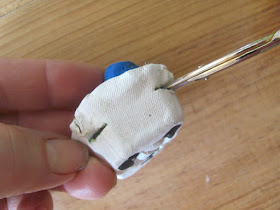 Once you've made a hole, carefully cut along the slot lines, and wiggle the scissors in and out a bit, so it's easier to push the ears into place. 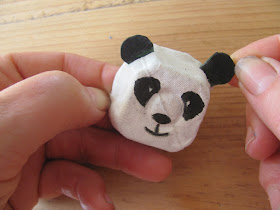 Then glue the head into the body slot.

We gave our panda a bamboo to chew on. Cut the pointy bits off another cocktail stick and wrap and glue a few small rectangles of green tissue paper around one end. Snip when dry.

Replace the cocktail stick holding the arms in place with the bamboo shoot. 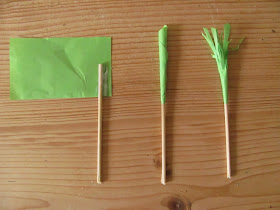 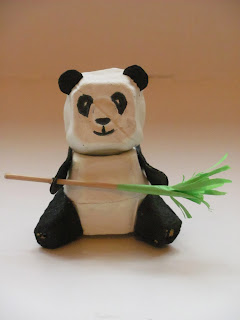 Peter spends a lot of time hanging out with the monkeys... 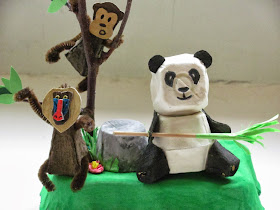 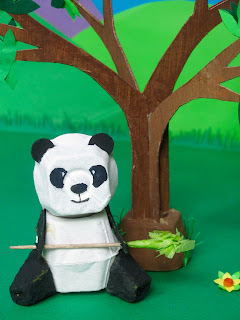 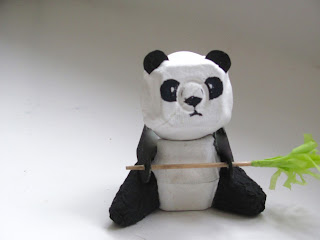 You can also make a bear in exactly the same way - just change the paint colour - and try a lighter shade for the muzzle and tummy (and paws if you like).
Use the cocktail stick to hold the arms to the body while the glue dries, and then remove it, or use a glue gun if you have one. 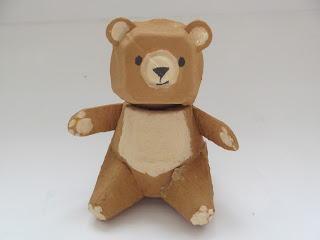 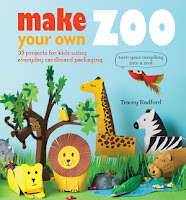 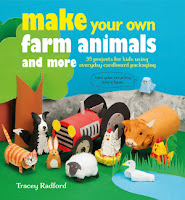